THE BOYS OMNIBUS VOLUMES BY DYNAMITE 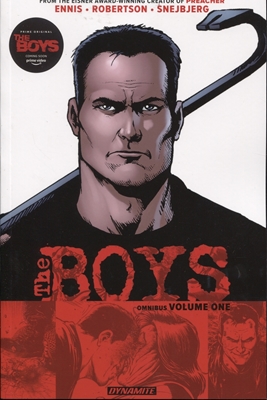 In a world where costumed heroes soar through the sky and masked vigilantes prowl the night, someone's got to make sure the "supes" don't get out of line

"No one has ever taken a jackhammer to the foundations of superhero mythology quite like writer Garth Ennis and artist Darick Robertson..." - FORBES

"The Boy's isn't just a brilliant satire of the genre, but also a power metaphor for real-world ills." - BRIAN K VAUGHAN (SAGA,RUNAWAYS)

"One of the ballsiest books on the market today." - JASON AARON (AVENGERS, START WARS)

"One of the most epic superhero stories of the last decade." - NEWSARAMA

"The Boys is one of the best political thrillers of the 21st century disguised as an anti-super hero comic book." - SUPERHERO HYPE

"The subversive commentary and disdain for superheroes kept this pseudo-satire of violoent proportions at the pinnacle of comics over the years." - COMIC BOOK RESOURCES

In a world where costumed heroes soar through the sky and masked vigilantes prowl the night, someone's got to make sure the "supes" don't get out of line. And someone will.

Billy Butcher, Wee Hughie, Mother's Milk, The Frenchman and The Female are The Boys: a CIA-backed team of very dangerous people, each one dedicated to the struggle against the most lethal force on Earth-superpower. Some superheroes have to be watched. Some have to be controlled. And some of them - sometimes - need to be taken out of the picture.

Purchase your copy of The Boys Omnibus Volume 1

Desperate to understand the world he's now a part of, Hugie turns to the man behind it all- the bizarre figure known only as the Legend. Sixty years of the Vought-American corportation's superhero agenda for America are soon to be revealed, with the worst secret of all begining on 9/11/11. As Hugie's affair with the beautiful young Annie January blossoms into love, The Boys take a run at Vought's number one franchise The G-Men- but neither they, G-Force, G-Coast, G-Style, G-Wiz, nor the G-Nomads are about to give up their slice of the G-Pie. For the worst reasons in the world, their millionaire leader John Godolkin must protected...even unto death.

Purchase your copy of The Boys Omnibus Volume 2

When the Seven, Payback, Teenage Kix, Fantastico, and every other superhuman Earth team up for an annual crossover event like no other, a certain "five complications and a dog" will not be far behind. But the Boys have set their sights on very different, much bigger game than usual, and when the truth behind a great American tragedy is revealed, the hunders finally become the hunted. Their closest brush with death yet leaves MM, Frenchie and The Female in reflective mood- which is good news for Hughie, whose curiosity about his comrades' stories is finally answered. Butcher, however, remains tight-lipped... leaving Hughie more in the dark then ever.

THE BOYS OMNIBUS VOLUME 3 COLLECTS THE BOYS: HEROGASM #1-6, AND THE BOYS #31-38, AND INCLUDES THE STORIES

Purchase your copy of The Boys Omnibus Volume 3

Hughie finally meets the real superheroes: the warriors for truth and justice, who fought to make things right and ask for nothing in return. But Butcher has learned the Scotsman's secret and at the vast super-evan-gelist festival of BELIEVE, his romance with Annie January- aka Starlight of the Seven- reaches its terrible conclusion. Mind reeling, Hughie goes back to his bizarre hometown, to get his head together after months of unimaginable chaos- but his luck has always been more cloud than silver lining, and soon a figure from his recent past arrives to resolve some unfinished business. You can go home again... but whether or not you should is another matter entirely.

THE BOYS OMNIBUS VOLUME 4 COLLECTS THE BOYS #39-47, HIGHLAND LADDIE #1-6, AND INCLUDES THE STORIES

Purchase your copy of The Boys Omnibus Volume 4

The long-dreaded superhuman conflict is on its way. The shockwaves from The Boys' first encounter with The Seven still reverberate today, and Hughie discovers the history of his comrades' clandestine war when original leader Colonel Greg Mallory takes him through half a century of the filthiest black operations imaginable. With both good and bad guys teetering on the brink, a shadowy force sets events in motion that will push even Butcher over the edge.

And Butcher? He could have been a very different man- when the love of a good woman pulled him aside from his path of violence and despair. This is the story of Billy and Becky, told by the man himself: from the backstreets of London's East End to the carnage of the Falklands War, from the heights of love to the depths of tradgedy. And when he's done, he'll be ready... to finish things once and for all.

THE BOYS OMNIBUS VOLUME 5 COLLECTS THE BOYS #48-59, AND THE BOYS: BUTCHER, BAKER, CANDLESTICKMAKER #1-6, AND INCLUDES THE FOLLOWING STORIES

Purchase your copy of The Boys Omnibus Volume 5

The Boys prepare for one last terrible battle, as the Homelander sets an army of superheroes against the forces of the United States military. Battle rages at the White House, Frenchie and the Female are unleashed, and Hughie faces his own terrors... while MM races against time to uncover the most dreadful secret of Vought-American's superhero program. Butcher steps willingly into the jaws of death: but what he finds waiting for him is beyond his darkest dreams.

And when the guns fall silent... The Boys are cought in the last throes of the battle they were recruited to fight. Hughie, all on his own and out of luck, finds himself walking down one last bloody trail -- and the truth he finds at the end of itwill be nothing short of shattering. Billy Butcher's vengeance comes full circle, in this final entry in the story of The Boys.

Purchase your copy of The Boys Omnibus Volume 6

Is it easy to get promo and special offers here.

We have Jili178 agent system to drive traffic to your betting website and boost your revenue.

Is it easy to get promo and special offers here.

We have Jili178 agent system to drive traffic to your betting website and boost your revenue.